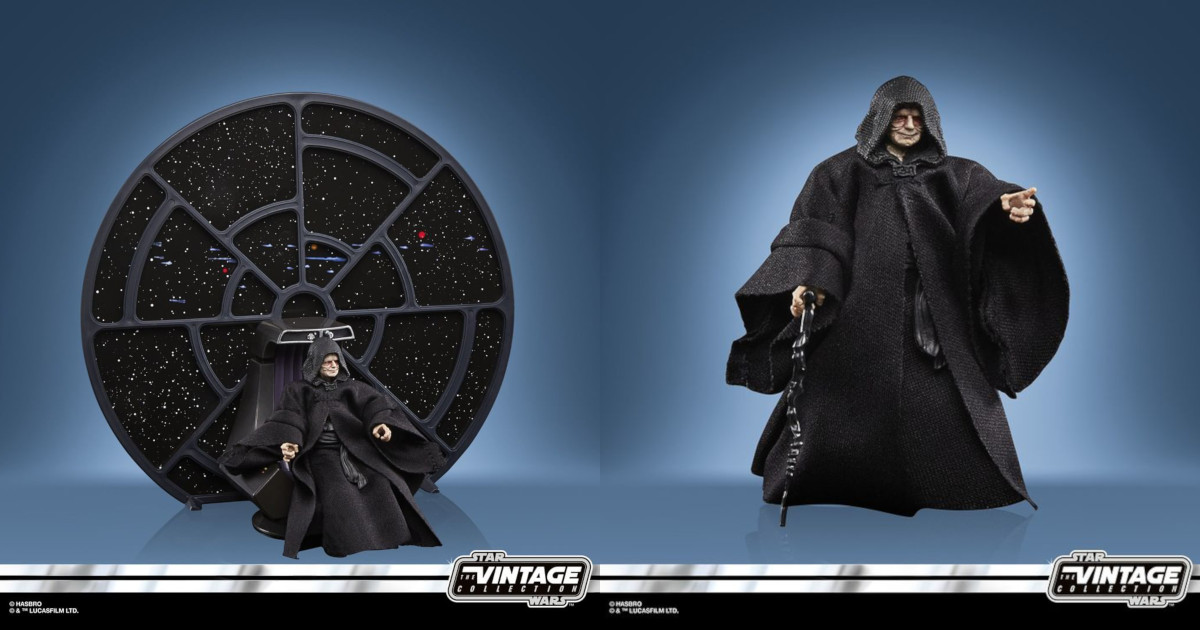 Star Wars The Vintage Collection is a line of action figures produced by Hasbro that celebrate the style of the original Kenner Star Wars toys that were produced from 1977-1985. The articulation and character design for these figures have, of course, evolved with the times. The line produces incredible-looking figures while the packaging remains consistent with the style used in the 1980s.

Kenner didn’t only produce action figures, though. They also created playsets, ships, and accessories to go along with them, which helped kids and collectors to recreate some of their favorite scenes, and even create new ones. Hasbro has honored that tradition of the playsets and ships with similar releases with packaging that all remain consistent with Kenner’s.

Now, with the Emperor’s Throne Room Playset, Hasbro has taken part in another tradition used by Kenner and other toy companies of the past. The playset includes an ornate box that, when opened, resembles the rest of the throne room where the final duel of Return of the Jedi took place. The integration of plastic and cardboard to create this piece is similar to the Land of the Jawa’s Playset, cardboard Death Star, and the Cloud City Playset. The only difference is that this throne room doesn’t depend on cardboard to make it usable.

Could This Mean That Hasbro Will Use More Cardboard Moving Forward?

It could open the possibility of larger playsets at an affordable price, considering the Emperor’s Throne Room retailed for $31.99 and the playset before, the Tantive IV, retailed at $52.99. With the cardboard flaps extended, the throne room is larger than the other playset, which shows how much cheaper the option can be while still offering a nice-sized playset.

Naturally, the use of cardboard is cheaper. It can be printed on and allow for vivid scenes and details from the movies. The plastic playsets need a mold and someone to figure out the small details, which costs more money.

Hasbro did an excellent job of making this set not come off as cheap. The cardboard drawer is a nice touch to the piece. The easy storage of the accessories is convenient and well thought out. It heightens the idea of the cardboard playset by adding a bit of sophistication rather than leaving it as a simple, cheap box.

Overall, it feels that this playset was a nice surprise. The box fully displayed was not advertised on Hasbro’s website, so that could be an indicator of whether or not they move forward and incorporate more cardboard, but the reaction this has received from collectors is generally very positive. This playset, the price, the Emperor figure, the accessories, everything about it is well done. The only complaint is that once the cover is removed, the flaps won’t stay up. That issue can be solved by using tape, like the one included on that cover, but those small details are important and really make the difference.

So what could we see moving forward? Well, another Death Star set similar to the Kenner release is a possibility. The Cloud City playset is also another one we could see in the future. Other similar setups that may require multiple levels would be the perfect candidate for a carboard and plastic mix.

What are your thoughts on it? Were you able to get your hands on this Hasbro Pulsecon Exclusive? What other playsets would you like to see in the future? Comment down below or on the Facebook page!

Thank you for reading, and don’t forget to enter your email to subscribe to the Sandcrawler Blog. Oh, and remember, utinni.